Solve the circuit and find the power of sources: 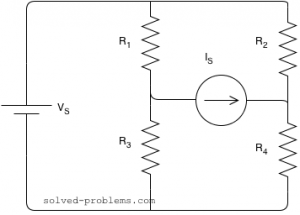 Solution:
There are three meshes in the circuit. So, we need to assign three mesh currents. It is better to have all the mesh currents loop in the same direction (usually clockwise) to prevent errors when writing out the equations. 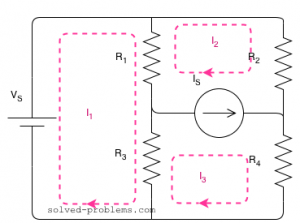 A mesh current is the current passing through elements which are not shared by other loops. This is to say that for example the current of the voltage source is

and so on. But how about elements shared between two meshes? Current of such elements is the algebraic sum of both meshes. For example if we assume the current of

is defined with direction from top to bottom, its current would be

. If one assume the inverse direction, i.e. from bottom to top, it would be

.
Now, lets write the equation for mesh of

(Mesh I). A mesh equation is in fact a KVL equation using mesh currents. We start from a point and calculate algebraic sum of voltage drops around the loop:
First the voltage source:

Now we have reached

from its upper node. So its current is


Let's continue writing the equation. The next element, which is also the last element, is

. Without further thinking we can say that the term associated with this element is

.
The equation for Mesh I is done. The next mesh is Mesh II. But wait! what is the voltage across the current source to write in the mesh KVL equation? We don't know. There are two ways to resolve this issue:

A supermesh is a larger loop which has both meshes inside.
Let's try both methods.
1) Using 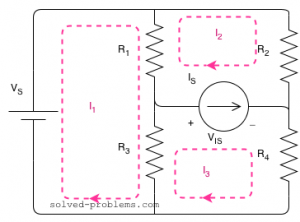 , unlike the equation for Mesh I, the current is

. This is because we are walking around the loop with the direction of

, or briefly it is because we are writing the equation for mesh of 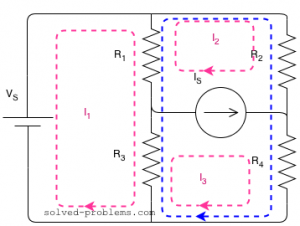 Around the loop clockwise:

.
As you can see, we were able to write the equation in one shot. That is why the supermesh method is preferred.

Now, we have two equations: one for Mesh I and one for the supermesh. But there are three unknowns:

. So we need another equation. The third equation comes from the current source by writing KCL one of its nodes. We choose the node which is not shared by third loop which is the loop at the right hand side for this example. This way we minimize the number of terms in the equation. Note that the current of

are more complicated because of

involvement.
Let's apply KCL for the right hand side node.

are entering to the node and 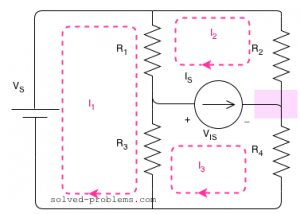 Now we have all three equations:

as it is located at the unshared part of Mesh I. The current is entering from the negative terminal. Therefore, the active sign convention should be used to find the sign of power:

(supplying power).
Take a look here if you are would like to know how power of independent sources should be calculated.

For the current source, the voltage is

and can be calculated by KVL equation of mesh II:

Here, the current is entering from the positive terminal. So, the passive sign convention should be used:

Now, it is on you to find the power of all resistors and validate that the power conservation law is satisfied.