Voltage Division Rule: The voltage is divided between two series resistors in direct proportion to their resistance.


It is easy to prove this. In the following circuit

the Ohm’s law implies that

Substituting in I and II


which shows that the voltage is divided between two series resistors in direct proportion to their resistance. The rule can be easily extended to circuits with more than two resistors. For example,

The voltage division rule can be used solve simple circuits or to simplify solving complicated circuits.
For example, check out this problem. 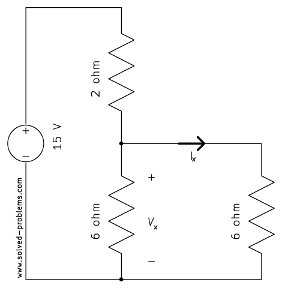 It will be incorrect if one tries to find

using voltage divider by neglecting the other 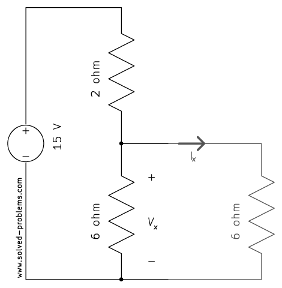 . However, if solving other parts of a circuits confirms that the current of the other element/branch is zero, the voltage division rule can be still applied. For example, suppose that the following network is a piece of a larger circuit. 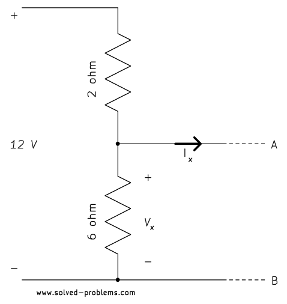 Let’s assume that the analysis of the circuit shows that

regardless of where A and B are connected.

The voltage devision rule can be used to ease solving problems. For example, the voltage division rule is used in the following problem to find the Thévenin voltage:
Thévenin’s Theorem – Circuit with An Independent Source
.